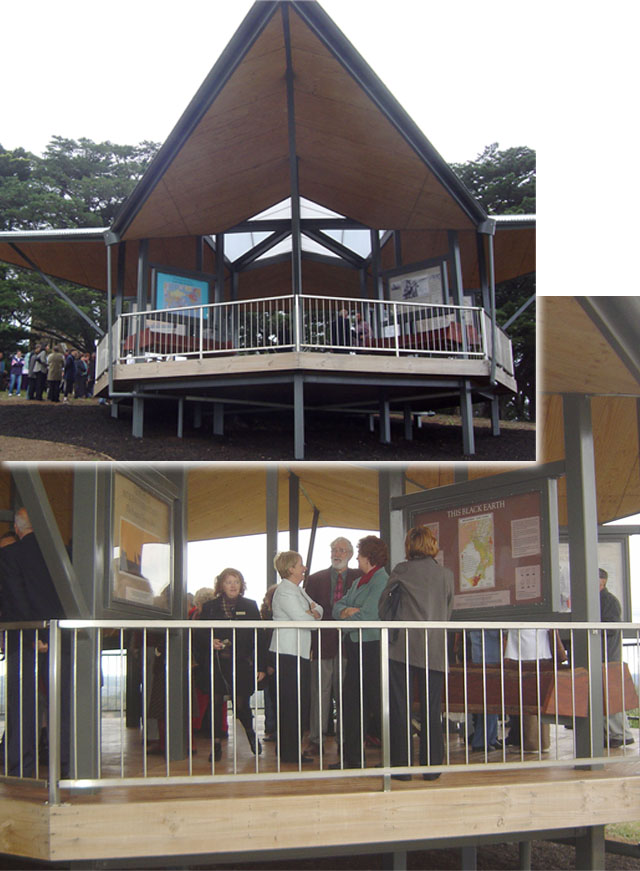 The Moor-rul Viewing Platform was officially opened on 17th April, 2008 – in the presence of the Hon Jenny Macklin, MP – shortly after the launch of the Shire’s Reconciliation Charter.
The function of the platform is to provide shelter adjacent to the War Memorial Tower whilst allowing people to enjoy the stunning panoramic views.
From the platform you can see the Dandenongs, the city of Melbourne, the You Yangs, Mount Macedon, the Kinglake Ranges and the Mt Baw-Baw Ranges where the Yarra River starts. This landscape covers all the ancestral lands of the Wurundjeri and some of the wider Kulin nation land.
The platform has been given the name Moor-rul, a name which described the fertile soils of the Kangaroo Ground area in contrast to the poorer (Silurian) country of its surrounds, which the Wurundjeri knew as ‘Nillumbik’ or less-rich country.
The full 360 degree view can be seen from the adjacent Tower of Remembrance, which has 53 stairs. The viewing platform, however, can be accessed by wheelchair.
Inside the viewing platform, eight double-sided interpretive panels set out the Aboriginal and European history of the area, and also the geology and local flora and fauna, so that the casual visitor comes away understanding more about this significant part of Victoria.

The Friends of Moor-rul Reconciliation Grasslands has been formed to care for the small section of land next to the new viewing platform at the Kangaroo Ground Tower. The group is supported by the Environmental Works Unit of Nillumbik Shire.

The grasslands are surrounded by a rabbit proof fence, and will be regenerated with plants indigenous to the area as part of this historic memorial. Originally it would been covered by grasses such as Weeping, Kangaroo and Wallaby grass species.

Some remnants of the original grass cover remain, and work has commenced on a major weeding program to rid the area of Capeweed, Plantain, Oxalis, Briza and other weeds. This will allow the plants already there to seed and hopefully germinate in the cleared areas. There has also been an experimental area of cool burn of some annual grasses before seeding to see if this process will be successful.

A plan has been drawn up by a local expert and areas will be planted at appropriate times. Plants are propagated as required in the Edendale Farm nursery.

Volunteers are welcome to join the group – please ring Jann Darvill on 9439 7342 for further information.