The tours aim to give an understanding of Wurundjeri culture.

This is done through the use they made of the flora and fauna of the area.
Please contact the Secretary for further information.

HISTORY OF THE GAWA TRAIL

After the Nillumbik Reconciliation Group had run either one or two Short Story Awards in the 1990s, it had become apparent that the kids hadn’t quite caught on to the local Aboriginal story. So it was agreed that a worthy goal would be for NRG to chase up a piece of bushland for them to walk and learn more about how life had probably played out for the Wurundjeri.

The convenor of the Friends of the Warrandyte State Park at the time had been my good friend Margaret Burke, and when I’d learnt that she’d won an $180,000 Grant from the Federal Government’s Telstra Fund to do restoration work on the Warrandyte-Kinglake Corridor, I approached her about using one of the seven bushland reserves along that Corridor as an Aboriginal Trail.

By arrangement the two of us met at the first of these reserves just across the bridge over Watsons Creek on the Eltham-Yarra Glen Road (right-hand side), and checked it out. I immediately recognised it as being too weedy and unsuited, so we moved on to the reserved area on the other side of the road – and it was just perfect.

So I asked her whether some of the Telstra money in the National Heritage Trust bucket could be diverted to develop it as Aboriginal Walking Trail. Margaret was all for the idea, and so in consultation with Llewellyn Pritchard we marked out a loop.

Seven young members of the Green Team came on board, who developed the present trail in association with Parks Victoria conditional on there being no mechanical clearing. So the paths were cleared by hand, seats and rails installed along with the nine original wooden markers and attached texts. 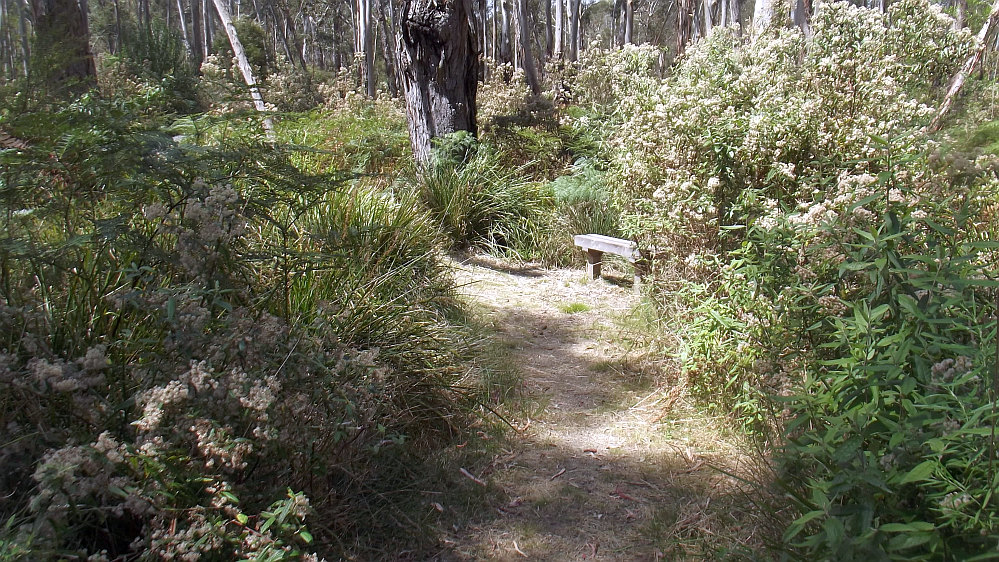 The Gawa Wurundjeri Aboriginal Resource Trail is near Watsons Creek on the Eltham-Yarra Glen Road. It provides a self-guided tour, with markers explaining how the Wurundjeri clan of about 50 people lived near the creek, and used the land to obtain bush foods, medicines, implements, shelter and clothes – all created by their Dreamtime spirits.

The clearly marked 340m looped trail was launched by Wurundjeri elder Jim Wandin and the Nillumbik Reconciliation Group in partnership with the Nillumbik Shire Council on August 12, 2001.

“If the spirit that is evident in the people who were at the launch pervaded the rest of the country, there would be no need for reconciliation,” Mr Wandin said.

Nillumbik Reconciliation Group president Mick Woiwod said the trail was made possible with a $20,000 grant from the Natural Heritage Trust and the labour of the Green Corp volunteers.

The resource trail would help the community’s understanding of Aboriginal culture and would also be widely used as a teaching aid, Mr Woiwod said. “A lot of people wouldn’t last very long out here, but the Wurundjeri people had quite a lot of food because they knew where to get it.

Mr Woiwod said the trail originated from a children’s short story competition on Aboriginal life. To help write these stories, the children needed a deeper understanding of Wurundjeri life. “But now everyone can experience and enjoy what this walk has to offer,” he said.