The Wurundjeri used bracken fern as a mattress, an ointment and for making bread.
They used the springy, leathery fronds of the bracken fern covered with soft, possum skin rugs, for bedding.
The juice of the young stems is poisonous and was not eaten, but provided immediate relief for insect stings and bites.
Underground stems, called rhizomes, were fibrous and starchy, and when roasted and beaten to a paste could be made into a type of bread.

Bracken is a global plant growing in all but the harshest of desert environments. The bracken which is native to Australia is Austral Bracken, Pteridium esculentum. 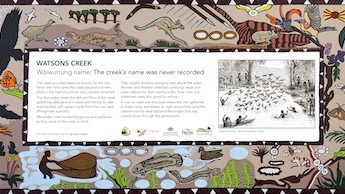