When the silver wattles bloom it is a time to remember William Barak, the highly respected leader of the Wurundjeri people, who died on August 15, 1903. All past Elders are also now honoured on this day.
Acacia wood is strong and dense, making it suitable for protective shields and hunting clubs for men, as well as digging sticks for women for collecting tubers such as yams. From the angled root of wattle, a Wurundjeri man could carve a boomerang to make a deadly hunting implement.
The gum of the Acacia (djaak) can be dissolved in water to make a sweet drink. When mixed with ash and made into a sticky paste it becomes a sealing agent used to waterproof baskets, tarnuks (water carriers), and canoes.
Acacias also provided food and medicine: seed for bread and flavouring, smoke for coughs, tannin for stomach trouble, bark infusion for rheumatism.

HOUSING: Willams were constructed out of the flexible limbs of mearnsii and then covered in bark slabs. Some round houses were built using these bendable limbs and heavy foliage.

FIRE MAKING: The wattle grub frass is found at the base of the trunk. The heavy bark means that it is home to many grubs and insects. This sawdust like frass is very flammable and a valuable fuel for Aboriginal travellers who could use the glowing embers carried by the women in a bracket fungus to make a fire very quickly when they made camp.

SAP: both a food and a drink. Mixed with water, a dash of sweet wattle flower nectar, a few formic ants for a lemony flavour and there was a refreshing drink. Sap mixed with ash was an effective plug for water carriers.

ROOTS: When in full flower the Wurundjeri knew that the roots were in their best condition for making tools and weapons such as boomerangs, clubs, shields.

SEEDS: ground into flour rich in polysaccharides and with a high protein content. Flat bread baked in ashes with wattle seed added was a treat for all the grinding and winnowing effort.

EELS: The seasonal changes were used as indicators. When the wattle flowers fall it is time to fish for eels. The blossoms coat the slow moving Yarra river and the eels feed on a small grub which lives in the flowers. Feeding is part of the eels preparation for the autumn migration. A good time to catch a well fed eel.

SYMBOLIC USE: Wattles also symbols Elders. Every part of the tree is used: blossoms, gum, seeds, bark, wood and roots: just like the elders with their experience and wisdom. 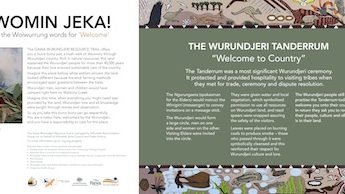